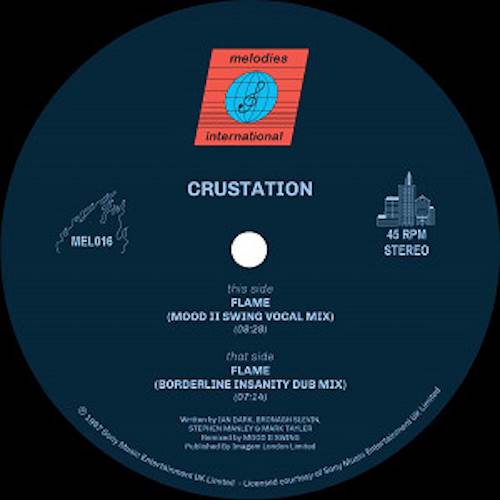 John Ciafone and Lem Springsteen from Mood II Swing grew up and met in New York City in the early 90s. They were club kids with roots in early hip hop, soul and disco and soon decided to start producing together. After a fateful encounter with Louie Vega from Masters At Work, Ciafone and Springsteen committed to pursue dance music, and given the opportunity started releasing their own records that would lead them to settle in as genre defining house producers celebrated by their contemporaries back then whilst informing and influencing the styles of many eminent dance music producers of today.

Flame was originally produced by Crustation, a Trip Hop group from Bristol formed by Ian Dark, Stig Manley, Mark Tayler and singer Bronagh Slevin, as part of their last album Bloom originally released in 1997 on Jive. The same year, Jive released a string of remixes including two from Mood II Swing included here on this release.
The vocal mix centres around full segments from Bronagh Slevin’s chorus and an incredibly satisfying progression of synth stabs based on the chord changes from the original which alongside Slevin’s silky vocals intimately captured the melancholy in the lyrics depicting recovery from someone’s unconditional love being taken advantage of repeatedly. However, Mood II Swing’s club treatment, subtle arrangements and sequencing bring an added sense of closure which feels somewhat cathartic and liberating, therefore resolving the song’s predicament. A true anthem for emotional dancefloors!

On the flip, we have Mood II Swing’s Borderline Insanity Dub mix which essentially discards the vocal version’s “song” aspect, focusing mainly on John Ciafone’s dexterous drum programming and an extremely simple and repetitive three note bass pattern, which alongside subtle use of overarching synth lines and chopped up elements from the original bring the track to an all time creative high shining in its full 7 minutes of dark, hypnotic bliss.

Both these remixes would go on to become club classics, the Borderline Insanity Dub mix in particular which embodies one of Ciafone’s brightest and most inspired moments in the studio, which would go on to influence a whole new generation of producers.

For Instance, in Floating Points’ words:
“I first heard the Mood II Swing dub mix on a mixtape by Phil Sherburne maybe 13 years or so ago. I think a lot of things changed at that point for me. It was probably my gateway into dance music, I hadn’t heard a groove like it. But it also has the hypnotic and repetitive elements that make this a record that can help dig into the deepest end of a DJ set or push it to the exciting rolling heights. It’s a record with everything I love about the genre!!”

Presented for the first time as a standalone release, remastered to the highest possible standards and cut to half speed lacquers at 45rpm, Flame’s Mood II Swing remixes are presented in loud 12 Inch format!