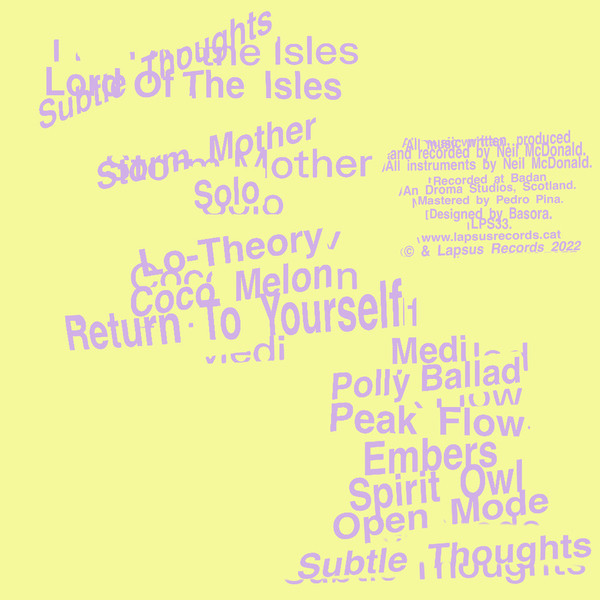 Neil McDonald’s love of the outdoors is a constant feature in his music, hence his Lord Of The Isles moniker, a direct reference to the Highlands and islands of his native Scotland.

His vivid, effervescent and blissfully cinematic sound paints a soundtrack to unmade films, building imaginary worlds inspired by his childhood passion for science fiction. It is therefore no coincidence that the closing track ‘Subtle Thoughts’ samples the inimitable voice of Carl Sagan and is also the name of his forthcoming album on Lapsus Records.

Subtle Thoughts’ is an album of sumptuous melancholic electronica that, like all his previous works, avoids being pigeonholed. In it we find ambient and IDM, but also breaks and down-tempo 4×4 beats with deep ruminations, and even passages akin to new age and Balearic. In Neil’s own words, the real concept behind ‘Subtle

Thoughts’ is “The spaces in between. Listening to the quiet voices. Freedom of expression and being open. It also contains my hopes and fears for the future of our world, but mainly hope and love”.

Subtle Thoughts’ will be released on 8 December with two advance singles: ‘Open Mode’ accompanying the album launch on 7 October; followed by ‘Return to Yourself’ on 4 November.