Skip to content
View basket “Impressions” has been added to your basket.

Tough, to the point, no-nonsense machine music is a longstanding Midwestern tradition.
Drawing a line all the way back to the old guard, The Bunker New York’s latest EP is Walk The Distance, courtesy of Mark Verbos, a techno veteran and New Yorker by way of Milwaukee who put together four pieces of heavyweight dancefloor artillery, informed by an intimate, inside-out knowledge of the machinery used in the production of these tracks.

“I’ve been doing this for a long time. In the beginning, there was only hardware, and it feels better to make music with physical objects. Plus, I make hardware, too,” says Verbos, recounting his production processes. Verbos not only produces music, he also produces the hardware he uses to make music—his company, Verbos Electronics, manufactures Eurorack synthesizer modules with a vintage sensibility. When he’s making music, Verbos says, “I try to get to know the devices I use well enough that whatever I imagine can come from them. Techno is machine music. When I’m recording, it’s just me and the machines.”

The music, however, speaks for itself. No punches are pulled here—the record starts in top gear with “Start Up Drive,” a devastating techno bomb centered around a throbbing, repeating bassline and a meaty kick drum that builds to a massive climax in the span of five minutes. “In The Back Room” kicks the tempo up a notch, featuring spaced-out atmospheric synth leads floating atop syncopated percussion. “Just A Little Late” is funkier than the other two, built around a rubbery, insistent synthesizer groove that worms its way deep into your head and doesn’t let go.

The aforementioned three tracks alone would comprise a solid techno EP suitable for any number of dancefloors. But the last track on the record—its namesake—shifts gears entirely. “Walk The Distance” is a moody, pulsing slow burner, introspective and emotional. It’s a haunting listen that adds remarkable depth and complexity to the record. “Walk The Distance, the track, is a reference to the fact that music is not a career. Any advice you could offer someone on how to have a successful career doesn’t really apply to a career in music. By that I mean to say, process is everything, and the results don’t really matter.”

Play All
A1. Start Up DriveA2. In The Back RoomB1. Just A Little LateB2. Walk The Distance 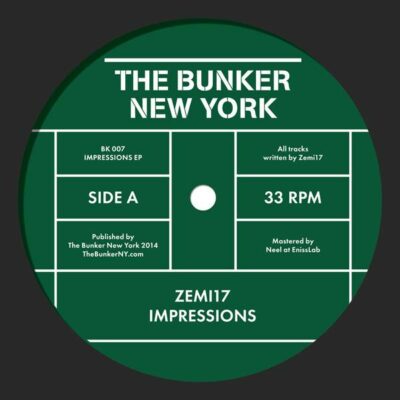