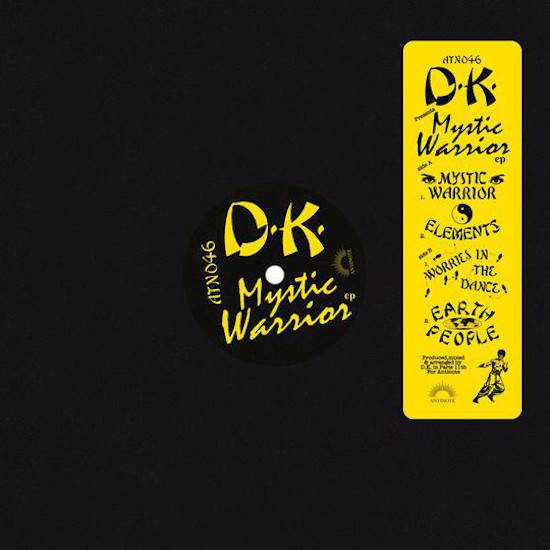 4 tracks, 2 bangers: D.K. starts a new season in the Antinote league with a 12′ 100% dedicated to the dancefloor. There’s a perfume of jungle (not the genre, the one from Donkey Kong Country, in case someone has still not made the connection between Nintendo’s #1 gorilla and the French producer) emanating from the whole record. The Parisian producer has also been taking a peep on some early 1990’s rave records (but who isn’t at the moment), as demonstrated by the two first songs, Mystic Warrior and perhaps even more flagrantly Elements – with its emotional pads and sad mock Jon Hassel-like trumpets.

Worries In The Dance, and Earth People are more of a warm up business – so to speak, in the language of the club. D.K. takes a step back, BPM-wise, only to allow a deeper exploration of the surroundings – namely shamans with bamboo flutes circling around you, monks meditating under a cascade, others ringing a prayer bell – that have more to do with Age Of Empire or any 1990’s adventure game set in a fantasized Asia than anything that actually exists IRL (probably a distinctive signature of the French producer). Anyway, there’s a Bruce Lee sticker on the sleeve that says it all, in a much more concise way.